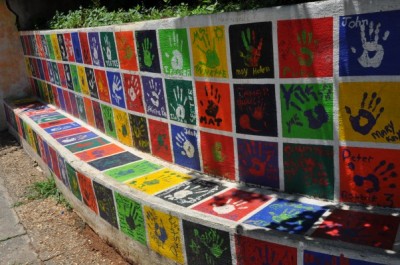 –excerpted from the oral history of Ann Fowler

Columbus Ward was the one that said, “That bus stop out there, that wall is atrocious.”  Well, he didn’t use the word atrocious, but he said it’s really awful—something needs to be done to help clean that up.  . . .  I love painting murals, and this was a big project and I wanted to involve the community.  I started to think of a way that I could get community help easily, but also have something that represents the community.

I proposed this design: a person’s hand print and their name, to be done by people from the neighborhood.  I think we started it—well, it was a year-long process because the wall was cracking.  There were ants that were coming out of it.  I think people still hang out there, but it was known as some place that if the police drove by, they’d stash their gun or drugs in the bushes there.  It was really unsightly.

How I got the wall plastered, or fixed up and redone, was, I was standing out there shaving it away, sanding down the rocks, or the surface, and one of the street people in the neighborhood walked by and said, “Do you need some help?” I said, “Sure! I could use some help.”  He said, “Well you know, I used to this kind of as a living when I was in construction.”  So he helped mix up the mortar and fill in all the cracks. He did such a great job.  It was much better than anything I could have done.  This is the beauty of the neighborhood.

I got to talk to him, and he was still doing some construction work, and that sort of thing.  I don’t know how old he is.  He’s older, and he had been to prison, and all this is just coming out as we’re working side-by-side—the great leveler of backgrounds. I said, “What were you in prison for?”  He said, “Oh, I killed a man.” And I was like, “Okay.” I would trust this man with anything.  He became like my right-hand person on that project, especially in those early phases.  I would say, “Can you just watch these things while I go get us lunch?”  And he would watch it.  At one point there was some graffiti being etched into the wall, and he would chase teens off and that sort of thing.  I love that man, he’s just wonderful.  I would never have guessed that we’d be working side-by-side with someone with that kind of background, and I thank God that I had that experience.

This site uses Akismet to reduce spam. Learn how your comment data is processed.