The History of The Peoplestown Project 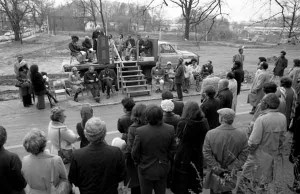 The Peoplestown Project launched in December 2008 as a long-term endeavor to document and interpret the Peoplestown neighborhood’s history of community development and neighborhood organizing. We seek organizational records, photographs, personal accounts, and other historical documents that will help preserve and tell the history of neighborhood empowerment and the organizing traditions of the area.  In our oral histories, we ask people questions like:

We are particularly interested in the “storied” experience of Peoplestown and its community-based organizations. We know that stories help bind many people to this place and to each other. Stories are told and re-told, creating a local lore that links people over time and space. We’ve already heard many: the strength and tenacity of a welfare rights leader, vans breaking down at Zesto’s, sleep-ins at the Model Cities offices, singing hymns in the visitor gallery during a General Assembly session. We embrace, collect, and re-circulate those narratives, acknowledging their role in strengthening social networks and sustaining neighborhood life.

The Peoplestown Project also continually works to integrate Peoplestown’s history into public programming, co-curricular activities (like the summer arts program at Emmaus House), and the like, so that children, new residents, social service interns, and others will come to know the rich history of Peoplestown and its long-time residents. By preserving the stories of community organizing and neighborhood preservation and development, and by involving area residents in the documentation and interpretive process, we help continue Peoplestown’s history of fostering active citizenship by promoting and facilitating an engaged civic life.

This entry was posted in Interpretive Projects, Peoplestown Project Blog, Peoplestown: The Place. Bookmark the permalink.

This site uses Akismet to reduce spam. Learn how your comment data is processed.